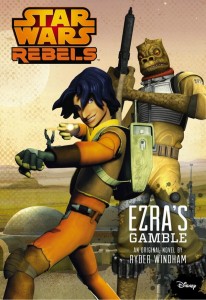 Fourteen year-old Ezra Bridger lives alone on the Outer Rim planet of Lothal. He fends for himself by picking up odd jobs and hustling unsuspecting stormtroopers. But when Arena Day arrives–an underground tournament where mighty beasts battle to the finish and all the swindlers, gamblers, and no-gooders come to make a profit–Ezra is whisked into an unlikely partnership with the fearsome bounty hunter Bossk and enmeshed in a high-stakes chase against an endless fleet of troopers. Ezra isn’t willing to trust anyone, but he soon learns that surviving doesn’t always mean just fending for himself.

This original junior novel is a prequel to the new animated series Star Wars Rebels.