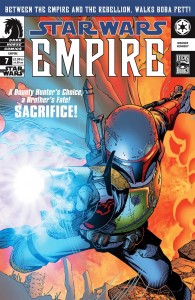 With the news of the destruction of the Death Star spreading throughout the galaxy, the Rebellion has grown bolder — and the Empire has cracked down harder. On a remote world, the struggle between self-rule and Imperial edict has erupted into a civil war that pits brother against brother. When the feared bounty hunter Boba Fett is dropped into the middle of the action, things really heat up! But with the Rebellion’s forces consolidationg, and the Imperial fleet on the way, which side will Fett support? Boba Fett as you love him, by the team that brought you the Boba Fett: Death, Lies, and Treachery collection!