Empire #34: In the Shadows of Their Fathers, Part 5 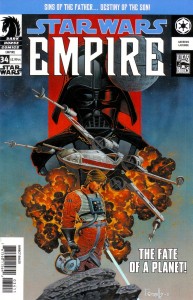 For the second time, events on Jabiim are coming to disastrous ends because of the presence of a Jedi named Skywalker.

The first time was during the Clone Wars when young Anakin Skywalker was forced to abandon the Loyalist Jabiimi troops to the not-so-tender mercies of the Separatists.

Now, Luke Skywalker, whose presence on the otherwise insignificant planet has attracted the attention of none other than Darth Vader, must decide whether to stay and fight and risk everything, or escape and leave the Jabiimi freedom fighters to face Vader’s wrath.

But the choice may not be Luke’s alone-and no matter what he decides, Vader could end up with another prize that could doom the Rebel fleet!