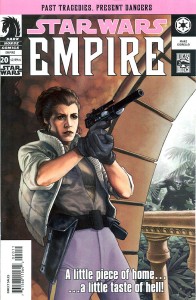 It’s six months after the destruction of the Death Star, and every Rebel in the galaxy has a price on his or her head. Worse, the Rebel Alliance still has not been able to locate a new, secret location for a base. But Princess Leia has an idea: an acquaintance from Alderaan has a hunting preserve on a small, uninhabited moon. It might be the idealt spot—provided she can persuade her friend to allow it, and that the Imperials don’t find out, and if the local wildlife doesn’t prove to be too dangerous…The perfect spot for the Rebel base may just be the perfect spot for a princess to die!