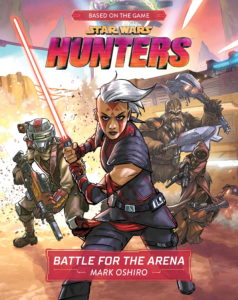 An exciting book based on the game Star Wars: Hunters!

On the planet Vespaara lies the Arena—a series of battlefields where fighters known as Hunters face off in teams to compete in front of roaring crowds. Newest to their ranks is Rieve, a Force-sensitive orphan from Corellia with abilities she can barely control, and a past she desperately wants to leave behind. But Rieve gets off to a rocky start, strugging with her lack of confidence both inside the Arena and with her fellow Hunters. And when a mysterious stranger begins stalking the Arena, Rieve fears her troubled past has finally caught up with her….

Includes original illustrations based on the game characters!