Last of the Jedi 5: A Tangled Web 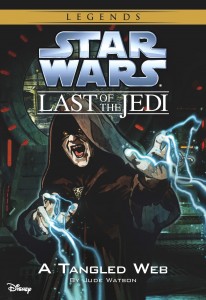 Since evil Emperor Palpatine destroyed the Jedi Knights and seized power, his reign has been absolute. He controls the Senate. He controls the Imperial Army. He controls the galaxy. He is a Sith. And now, for mysterious reasons, he wants to control Ferus Olin, ex-Padawan. Ferus does not want to aid the Empire in any way. But when the Emperor threatens the lives of the people closest to him, Ferus doesn’t have a choice. He agrees to go on a secret mission for Palpatine – to become a double-agent – and somehow keep his allegiance to the fallen Jedi Order. Can he succeed? Or are the Emperor and his henchman Darth Vader too powerful to overcome?