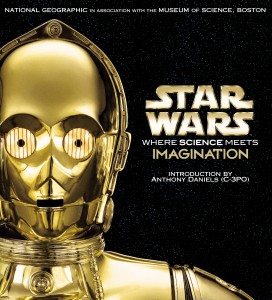 Just saying the words Star Wars evokes images of whooshing light sabers, Luke Skywalker’s landspeeder racing above the sand, and epic battles between the forces of good and evil that take place in the farthest reaches of space. Star Wars: Where Science Meets Imagination explores how George Lucas’s incredible use of science and technology may have presaged-and at times directly influenced-the future of life on Earth and beyond.

From commercial space flight and super-speed trains that levitate by magnetism to robot servants and microscopic nanorobots that perform surgery internally, scientists inspired by Star Wars are taking fictional ideas and turning them into reality. In the next twenty years, human soldiers will be outfitted like stormtroopers, impervious to chemical weapons and equipped with superhuman endurance. Such advances, while monumental, also raise huge ethical questions. The book gives voice to the scientists and creators of the technologies whose stories describe the complexities and consequences of such advances.

Perfectly timed to coincide with the DVD release of the final film in the prequal series and to take full advantage of the 9-city exhibition as well as Star Wars’s cross-generational appeal, Star Wars: Where Science Meets Imagination will delight both fans of the films and the technologically savvy.