The Star Wars Vault: Thirty Years of Treasures from the Lucasfilm Archives 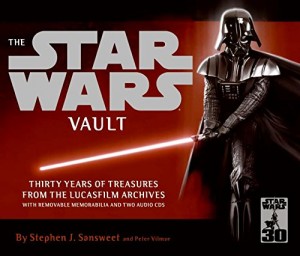 „A long time ago in a galaxy far, far away…“ It’s been 30 years since those immortal words were first seen on movie screens nationwide and it was the start of a worldwide phenomenon and the beginning of the most successful movie franchise of all time.

The Star Wars Vault is the insider’s look at the development and making of all six movies, and the huge cultural impact they’ve had. In addition to hundreds of photos and pieces of artwork, the book includes fifty interactive, rare, and some never-before-seen pieces of memorabilia.

Among the book’s features are:

The Star Wars Vault is the ultimate, one-of-a-kind insider’s look into the sensation that launched a phenomenon that includes six feature films; two spin-off films; three television series with more to come; and an extensive collection of licensed books, comics, video games, action figures, trading cards, and many other products worldwide.