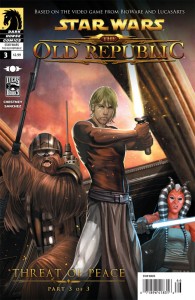 Under the thumb of a treaty that was negotiated after the Sith sacked Coruscant, the Jedi have attempted to maintain the illusion of peace-until now! Even as one battle ends on Balmorra, another begins on Dantooine, where Jedi Satele Shan finds herself clashing sabers with an enemy that threatens not just her body, but her soul! As the treaty begins to crumble around her, Satele knows something desperate must be done to save the galaxy from the return to war!