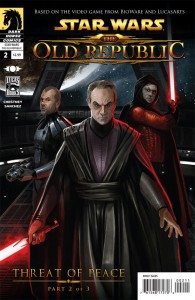 A peace treaty has been signed, but the galaxy is still at war!

The illusion of true peace has been broken by the Sith’s open attack on the Galactic Senate and the Jedi Temple on Coruscant. Held to the conditions of the signed treaty, the Jedi struggle to shoulder their losses for the good of the galaxy. On a mission to Balmorra, Jedi Satele Shan, Master Orgus, and Lieutenant Tavus will encounter something that will throw them off their course and make their assignment a lot more complicated!