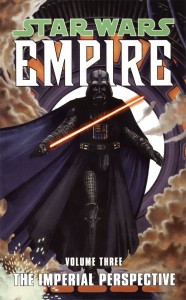 A loyal Stormtrooper, thwarted by the very bureaucracy which he serves, struggles to track down a Rebel saboteur on board the Death Star in the days and hours before the fateful Rebel attack. Darth Vader, the sole survivor of the explosion of the Death Star, crash lands on a primitive world where savagery is the key to survival. A young Imperial lieutenant learns all service comes at a price when his small company of Stormtroopers is attacked by thousands of angry aliens. Assassins from a planet destroyed by the Empire close on their target-the Dark Lord, Darth Vader.

Collecting issues #13-#14 and #16-#19 of the Empire series. All told from the point of view of the major villains of the Star Wars galaxy-the Imperials. But, as these stories show, even the „bad guys“ are no strangers to loyalty, honor, and sacrifice!