Boba Fett 1: The Fight to Survive 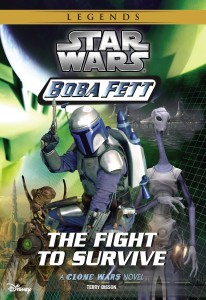 The Boba Fett series starts here! This adventure, which takes place between Episode II: Attack of the Clones and Episode III: Revenge of the Sith, follows Boba Fett as a teenager. On his home planet of Kamino, he has no friends, no school. The one thing he does have is a future as a bounty hunter like his father, Jango Fett. But when young Boba Fett finds himself alone in a dangerous galaxy, he must fight for safety.