The Art of Star Wars: The High Republic Volume I: Light of the Jedi 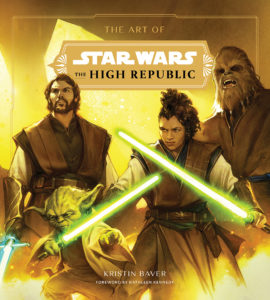 The High Republic Phase I: Light of the Jedi finds the Jedi Order and the Galactic Republic at the height of their respective powers, but following the events of “The Great Disaster,” the Jedi, led by Jedi Knights Avar Kriss, Loden Greatstorm, Keeve Trennis, and Stellan Gios and joined by a diverse group of Padawans and Jedi Masters, are confronted by the looming threat of the Nihil—a marauding group of Outer Rim anarchists who stand opposed to all the Galactic Republic represents. In The Art of Star Wars: The High Republic, readers will discover the origins of the fan-favorite new characters taking on this threat, as well as exciting new Lightsaber and weapon designs, beautifully rendered environments, and detailed models of Starlight Beacon—the shining symbol of hope in the Republic.

The Art of Star Wars: The High Republic is the only book to explore all facets of the design and artistic direction of a story that spans comic books, novels, and young adult books, taking Star Wars fans of all ages on a deep dive into the development of the New York Times bestselling series.