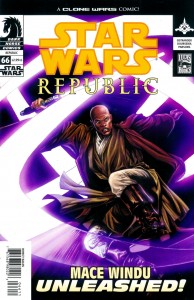 Four Jedi with prices on their heads versus a space station full of bounty hunters! Really, need we say more?

Mace Windu has decided that it’s time for the Jedi to flex their muscles demonstrate to the Bounty Hunters’ Guild the folly of attacking Jedi. It’s going to be a hard lesson—and one the Guild won’t soon forget. Meanwhile, Count Dooku sends renegade Jedi Quinlan Vos to teach a similar lesson to the person who originated the bounties. Is it a case of opposite sides working toward the same end, or are the Separatists still one step ahead of the Jedi?