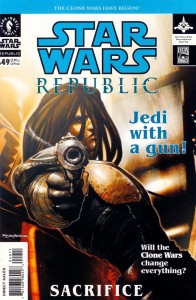 With the Battle of Geonosis, the galaxy is officially plunged into war. As the Jedi Council struggles with their new role as leaders of the Republic’s clone army, other Jedi operatives have taken on the job of intelligence gathering. On a vast space station known as „The Wheel,“ Jedi knight Aayla Secura is searching for a notorious gun-runner who can help her intercept the Separatist’s latest secret plans. But spying is a dirty business, and operatives are often more expendable than the information they possess. Is this what being a Jedi has come to? With this issue, Star Wars: Republic jumps into the as yet unrevealed events in the time period between Episode II and Episode III — the Clone Wars! If you’re wondering what happens next after Attack of the Clones, this is where you find the answers!