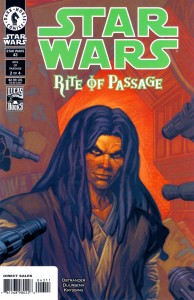 As Jedi Knight Quinlan Vos and his former Padawan Aayla each prepare to take the next step in their lives as Jedi (he to advance to the rank of Master, she from apprentice to Knight), they each make the decision to follow the living Force and see where it will take them. To their surprise, they both end up in the same place — coming upon the threads of a kidnapping plot, a conspiracy against the Republic, and a father-and-son team of bodyguards with the training and the weapons to destroy two meddlesome Jedi! Star Wars action as you like it!