Shadows of the Empire: Evolution #3 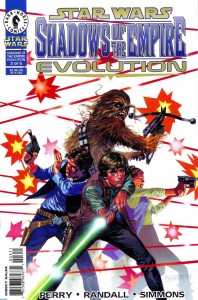 Human replica droid Guri has located the only one potentially capable of altering her assassin-driven programming, the surgical droid known as Doc. But now she’s being pursued by a bounty hunter, Kar Yang. Savan, working in disguise as a human female, is trying to secure her hold on the Black Sun organization — and realizes that Guri is the key. Luke, Han, and Leia, who are meeting with Savan on Coruscant in order to work out a peaceful end to the tumultuous turnover in Black Sun, have no idea who she really is, though.