Lost Tribe of the Sith 8: Secrets 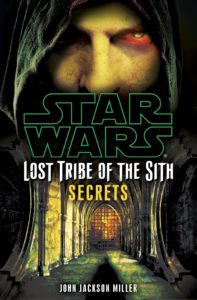 It’s the beginning of the end for this epic series in the thrilling final eBook installment, Star Wars: Lost Tribe of the Sith #8: Secrets.

Two thousand years ago, Commander Yaru Korsin braved mutiny and desperation—and inspired his shipwrecked Sith tribe to rise up, seize, and dominate the planet Kesh. Now a shocking revelation about those legendary ancestors has thrown the Sith into turmoil, pitting one against the other in ever-growing clashes that could bring about their downfall.

With his city descending into chaos around him, unassuming archivist Varner Hilts sets off for the forbidden temple, home to the wreckage of Korsin’s ship, Omen. Outnumbered by ruthless Sith warriors with nothing to lose, Hilts knows it may be a suicide mission. But he has a hunch that Korsin left something behind, something hidden until such an essential time as now—one final piece of knowledge that could save the rulers of Kesh from themselves and set them once again on the path toward a glorious destiny.