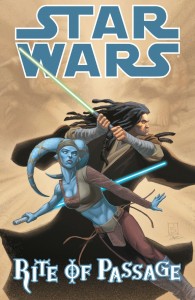 A royal heir has been kidnapped — along with Jedi Master Tholme, who was protecting the boy. Now two of Tholme’s former Padawans have teamed up to rescue their Master, unaware of the forces arrayed against them.

Their most immediate foes are a father and son team of Morgukai assassins, who have the training and the weapons to go toe-to-toe with Jedi. But behind it all are the machinations of the notorious Count Dooku!