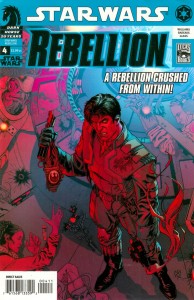 Luke Skywalker faces a squad of stormtroopers when he attempts to bring his boyhood friend Imperial officer Janek „Tank“ Sunber over to the Rebellion. Was Tank’s plan to defect discovered by the Empire before he could get away, or are the troopers a plot to trick the Alliance into letting Sunber into the heart of their operations? It might not even matter, because while Luke is off on his renegade rescue mission, the Rebel Fleet comes under attack-from inside the command ship!