Star Wars Rebels: Servants of the Empire 2: Rebel in the Ranks 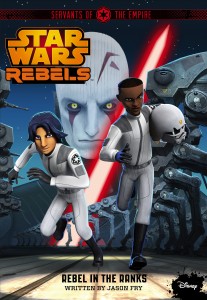 As a new student at Lothal’s Imperial Academy, Zare Leonis does everything it takes to pass as a model cadet. But secretly, he is a hidden enemy among Imperial loyalists, determined to discover the truth about his missing sister and to bring down the Empire. Luckily, he has his tech-savvy girlfriend Merei by his side, willing to help him however she can—even if it means dealing with criminals in the shadiest parts of Capital City. In the meantime Zare must face down a dangerous foe of his own: Lieutenant Curahee, who seems bent on pushing Zare to his breaking point. Join these rebellious cadets as they risk it all to take on the fearsome Empire.