Clone Wars Volume 6: On the Fields of Battle 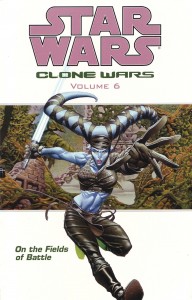 From the space-station headquarters of the Bounty Hunters‘ Guild, to untamed worlds on the edge of the galaxy, the Jedi must go where the Clone Wars take them.

On whatever field of battle the Jedi find themselves, their greatest challenge is to remain true to their teachings and to the ways of the Force!