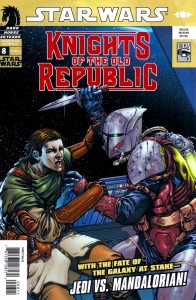 The Mandalorians have captured one of fugitive Padawan Zayne Carrick’s faithful companions, which means one thing – a rescue mission deep behind enemy lines! Above the mining world of Vanquo, Republic and Mandalorian starfighters battle, while down on the surface, the motley crew of the Last Resort become stowaways on their own ship, piloted by an unknown thief. Even if they regain control of the ship in time to pursue their friend’s abductors, how will they ever make it past the Republic and Mandalorian armadas, both of which want them dead! Forget about the Force, what these four need is some cold, hard luck!