Dawn of the Jedi: Force Storm #2 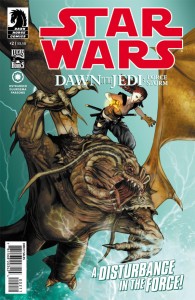 At the heart of a galaxy far, far away lies the Tython system–home of the Je’daii for thousands of years. Now a stranger has come and the balance of the Force has been disrupted.

Three young students feel the disturbance in the Force and are called to this new, shadowy presence. It is the calm before the storm that will engulf their planet and change the galaxy forever!