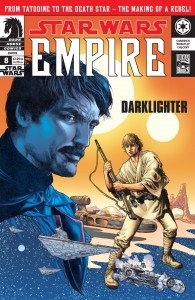 Everybody remembers the scene in A New Hope where Biggs Darklighter heroically sacrifices himself during the attack on the Death Star. Fewer people know is that before that fateful battle, Luke and Biggs were childhood friends. In fact, it was Luke’s dream to follow Biggs to the Imperial Academy. But what Biggs learns from his time with the Empire pushes him to become one of the earliest heroes of the Rebellion. Eisner and Harvey award winner Paul Chadwick (Concrete) writes, Doug Wheatley (Superman: Last Son of Krypton) and colorist Chris Chuckry provide the stunning artwork.