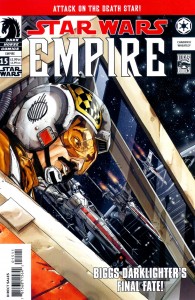 To Biggs Darklighter, it seems like he’s already lived a lifetime of adventures since joining the Rebel Alliance. But now, reunited with his boyhood friend Luke Skywalker, Biggs faces what will prove to be the adventure of his life–and his death: the assault on the Death Star!

Strap into your pilot seats and lower your blast shields–the Rogue Squadron is about to make galactic history!