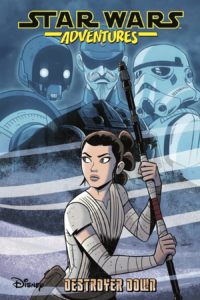 On sweltering Jakku in the days before The Force Awakens, explore with Rey as she races to uncover the secrets inside the crashed Star Destroyer!

Also includes a backup story depicting the battle of Jakku, revealing how the Star Destroyer Spectral met it’s fate during the last days of the Empire.