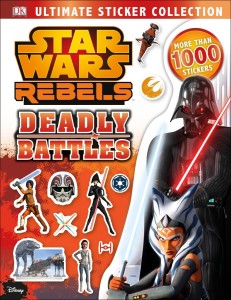 Join the galaxy’s bravest rebels on their exciting adventures and thrilling space battles in this Ultimate Sticker Collection, which features more than 1,000 full-color stickers from Season 3 of Star Wars Rebels, the popular animated TV series.

Join Jedi Kanan Jarrus and his ragtag group of rebels as they fight against the Galactic Empire in the next season of Star Wars Rebels(TM). Set between the events of Star Wars: Episodes III and IV, season 3 continues the adventures of the galaxy’s bravest rebels.

Create your own scenes with your favorite characters and learn more about what’s to come in season 3 with the Ultimate Sticker Collection: Star Wars Rebels Season 3.