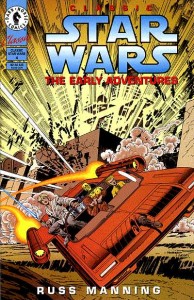 LLuke Skywalker is ordered by Rebel Command to abandon a reconnaissance mission. It seems that appearances of unscheduled transport capsules have coincided with the destruction of Rebel bases, and just such a capsule has landed — on Tatooine! Luke must return to his home planet, now a bustling locus of trade and a hotbed of rebellion, to discover how the Empire is finding out about the hidden Rebel bases. He finds the answer, but will it be at the cost of his life?