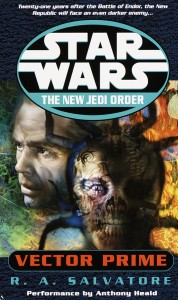 With the exciting new arrival of The New Jedi Order series, the next era of Star Wars history is about to begin. Here, fantasy and science fiction’s most acclaimed authors propel the legendary epic into the next millennium, introducing us to a rich cast of characters that features old favorites–Luke Skywalker, Han Solo, and Leia Organa Solo–along with the next generation of Jedi and never-before-seen creatures, droids, and deadly agents of darkness. In Vector Prime, the launch novel for this thrilling new saga, New York Times bestselling author R.A. Salvatore takes the Star Wars universe to previously unscaled heights of action and imagination, expanding the beloved story of a galaxy far, far away…

As the Jedi and the republic focus on internal struggles, a new threat surfaces, beyond the farthest reaches of the Outer Rim. An enemy appears from outside known space, bearing weapons and technology unlike anything New Republic scientists have ever seen. Suddenly, Luke, Mara, Leia, Han Solo, and Chewbacca–along with the Solo children–are thrust again into battle, to defend the freedom so many have fought for and died for. But this time, all their courage, sacrifice, and even the power of the Force itself may not be enough.