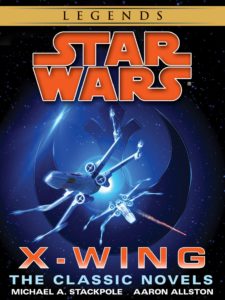 The X-wing/Wraith Squadron adventures comprise one of the most popular series in the Star Wars Legends universe, and now these ten thrilling novels are together in one convenient ebook bundle. Featuring galactic intrigue, hair-raising dogfights, and a diverse group of pilots determined to fight the good fight, this riveting collection includes the following titles:

They are sleek, swift, and deadly. They are the X-wing fighters. And as the struggle rages across the vastness of space, the fearless men and women who pilot them risk both their lives and their machines. Rebel hero Wedge Antilles knows the grim truth—that even with the best X-wing jockeys in the galaxy, many will not survive their near-suicidal missions. But nothing matters except defending the Alliance against a still-powerful and battle-hardened Imperial foe in a last-ditch effort to control the stars.