The Making of Star Wars Episode I: The Phantom Menace 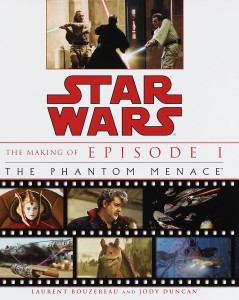 In 1977, George Lucas brought Star Wars to the big screen–and made science-fiction cinema history. Now, more than twenty years later, the visionary writer-director, his brilliant crew of special-effects wizards, and an exciting cast of talented stars have united to make the long-awaited and eagerly anticipated Episode I of the Star Wars epic.

Star Wars: The Making of Episode I is your exclusive entrée to the behind-the-scenes world where the wonders of the newest chapter in the Star Wars saga are brought to life by masters of movie-making magic. Join authors Laurent Bouzereau and Jody Duncan for a tour de Force through every fascinating facet of production on the dream project of the decade:

Lavishly illustrated throughout with hundreds of drawings and photographs, Star Wars: The Making of Episode I is the ultimate companion volume for fans of the film that launches the thrilling next phase in this exciting saga.