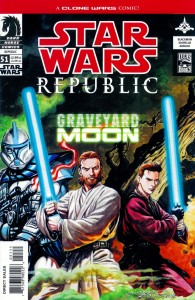 On one of the moons of Naboo, General Obi-Wan Kenobi and his troops make a horrifying discovery: the entire population of Gungan settlers has been wiped out in a genocidal chemical attack by a power-mad Separatist commander. Worse, Anakin discovers that the commander’s next target is Naboo itself, the home of his beloved Padmé! Hopelessly out-numbered by Separatist forces, the soldiers of the Republic have but one hope for success — but that hope seems shattered when General Kenobi is captured in battle! New worlds, new villains, and new heroes, as the epic saga of the Clone Wars unfolds!