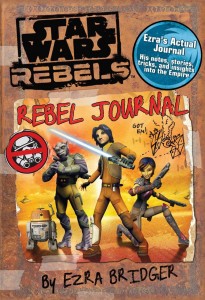 Based on the Star Wars Rebels television series, this book follows the adventures of Ezra Bridger through a replica of his own journal. In addition, sixteen pages in the end of the journal invite would-be rebels to continue the adventure with their own words and drawings.

Experience the adventures of one of the main characters from Star Wars Rebels through their own writings and sketches. Find out the thoughts and secrets behind the action in episodes from season one of Star Wars Rebels. Plus there exists an extra section in the back of the journal to record your own secret codes and plans for stregthening the rebellion!