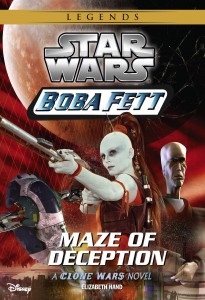 Don’t miss the third adventure in the Boba Fett series! When Boba Fett’s father, Jango Fett, died in the first Clone War battle, he left a fortune behind on the planet Aargau. Only bounty hunter Aurra Sing knows its location—but only Boba Fett can get to it—so they need each other to find and retrieve the fortune. But can they trust each other? As the search for his father’s fortune becomes dangerously complicated, Boba Fett must outsmart his enemies, hidden and otherwise. His future depends on it.