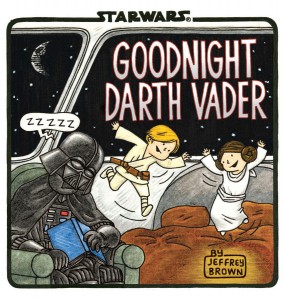 It’s bedtime in the Star Wars universe, and Darth Vader’s parenting skills are being tested anew in this delightful followup to the breakout New York Times Bestsellers Darth Vader and Son and Vader’s Little Princess.

Vader may be ready for his kids to go to sleep, but his twins, Luke and Leia, want a bedtime story first — one that involves the aliens, heroes, villains, and monsters of their world. From Han Solo and Chewbacca to Boba Fett and baby Ewoks, from the wampa ice creature to Jawas, all of the galaxy’s denizens are getting ready for a night’s rest in this delightful story told in verse, with plenty of nods to the rich Star Wars narrative.

Goodnight Darth Vader will delight Star Wars fans young and old, and, once again, remind parents that the experience of parenting is universal, even in a galaxy far, far away…