Darth Vader and the Cry of Shadows #5 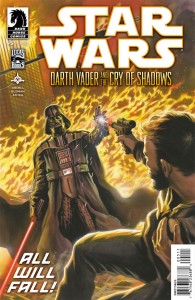 Stormtrooper Hock sabotages the remnant Separatists from the inside as they defend against Darth Vader’s advancing forces, and fights for his life against a figure from his past. At Vader’s side, Hock witnesses firsthand the power and ruthlessness of the man-machine he has followed into battle!