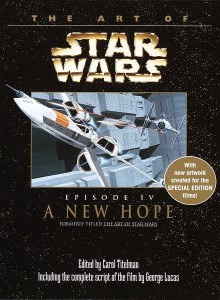 To compliment the new Special Edition versions of the classic Star Wars films being released in theaters, these new editions of the bestselling companion books each include sixteen pages of all-new material, plus all of the breathtaking photos, and artwork that have made them a must for all Star Wars collectors and movie buffs. Complete scripts for A New Hope and Return of the Jedi are also included.

Some highlights of the three volumes: