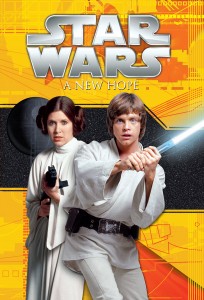 The movie that launched the greatest myth of modern times gets a whole new look with this manga-sized adaptation of Star Wars: A New Hope made up entirely of stills from the film!

Follow farm boy Luke Skywalker as a fateful meeting with two droids thrusts him headlong into a galactic civil war, the mysterious ways of the Force, and his galaxy-changing destiny. This is the story loved by millions around the world, presented here like never before!