Republic #63: Striking from the Shadows 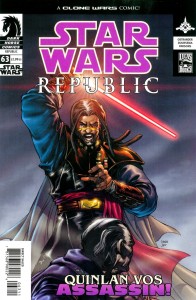 Jedi Quinlan Vos has taken a fateful step that may plunge him so far into darkness that he can never recover. His undercover mission for the Jedi Council has secured him a spot within Count Dooku’s inner circle, but when Dooku reveals to Vos that there is a Sith Lord within the Senate, Vos forgets his mission and agrees to kill the man! A little knowledge is a dangerous thing, and the secrets Dooku has revealed to Vos may be enough to destroy a Jedi!