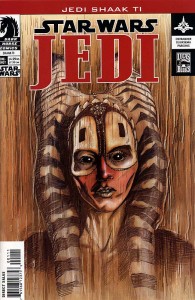 Among the Jedi, Master Shaak Ti is known as a peacemaker; the calm voice of reason. But caught on the ground on war-torn Brentaal IV with a rapidly dwindling platoon of clone troopers, Shaak Ti is forced to go on the offensive!

A Magna-gun emplacement is preventing Republic ships from landing reinforcements, and to save the mission–and the lives of Ti’s own troops–the guns must be silenced. To accomplish the task, Shaak Ti will accept whatever help she can get–even that of a killer convicted of murdering Ti’s former pupil!

Fire up you lightsabers and get ready for the biggest Clone Wars battle to date, with guest-stars from all over the Star Wars galaxy!