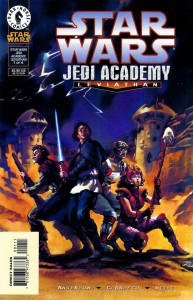 In the eight years since the fall of the Empire, Luke Skywalker has trained a new group of Jedi Knights, among them the warrior woman Kirana Ti, the sky-hermit Streen, the scholar and lore-master Tionne, and his greatest student, the brash Kyp Durron. Once trained, a Jedi must go where he is needed, to defend the New Republic and use the light side of the Force to help those in need.

On Coruscant, Chief of State Leia Organa Solo receives a desperate message from miners on the harsh world of Corbos. They have awakened something in their excavations and have come under attack. Luke sends Kyp Durron and the young clone Dorsk 82 to investigate and offer whatever assistance they can. But when Kyp and Dorsk 82 arrive on storm-swept Corbos, they find only an empty mining colony . . . and the scene of a terrible disaster.