Star Wars Rebels: Servants of the Empire 1: Edge of the Galaxy 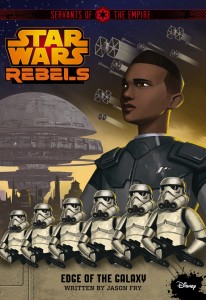 Zare Leonis seems destined to become a poster boy for the Empire. His sister Dhara has been accepted into the esteemed Imperial Academy on Lothal and Zare is confident he’ll join her in a year’s time. But a year can bring plenty of unwelcome changes. Not only does he begin to uncover the Empire’s destructive plans for Lothal and the livelihood of its people, but his unease hits home when Dhara goes mysteriously missing. Zare is forced to question everything and rethink what it means to be a good servant of the Empire.

This first book in an original series gives readers an insider’s look into a different part of the world of Star Wars Rebels.