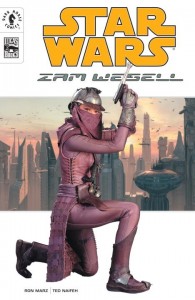 Zam Wesell is everything you’d want in a girl: beauty, intelligence, style, the ability to strip and assemble an EE-3 blaster rifle in less than six seconds… She really does have it all. It’s no wonder that she has caught the eye of fellow bounty hunter, Jango Fett. Jango is going to need her help in finding and destroying a powerful artifact that could prove to be very destructive if it fell into the wrong hands. Though he isn’t usually this sentimental, he wants to make sure the galaxy is safe for his young son. However, Zam’s motivations are not so noble. She plans to sell the artifact to the highest bidder. If they can’t trust each other and they’ve got every bounty hunter and cutthroat in the galaxy gunning for them, who can they trust?