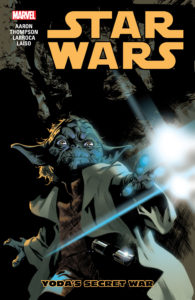 With one member of the rebel crew captured and imprisoned, we turn once more to the journals of Ben Kenobi and a legendary adventure with Jedi Master…Yoda! He’s trapped on a world full of vicious, mysteriously powered children. Not easy, will this be. Overpowered and captured, the master must become a student once more. And the ripples of Yoda’s struggle in the past will be felt by Luke Skywalker in the present! Connected, it all is! Plus: Join Princess Leia on a top-secret and highly dangerous mission on a planet that wants no part of the war against the Empire. When an injury threatens to end her mission, can she inspire that rebel spirit in a populace who just want to keep their heads down?