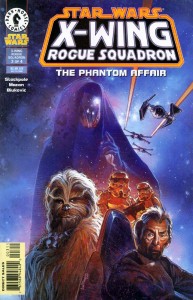 A cloaking device isn’t easy to come by — even a long time ago in a galaxy far, far away. But when the members of Rogue Squadron try to pick one up from the super-scientific alien inventors known as the Mrlssti, they find they’ve been accused of every crime from burglary to murder, and that the Empire will stop at nothing to bring them in!