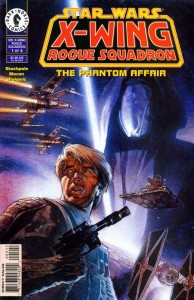 The Battle of Endor (from Return of the Jedi) was never fought — it was just so much Alliance propaganda. At least, that’s the lie being spread by members of the AEA (Ante-Endor Association). But Wedge Antilles and his Rogue Squadron comrades know the truth. They were at Endor when so many of their friends and colleagues gave their lives to destroy the second Death Star. And so, for those lost friends, this is a battle they will not fail.