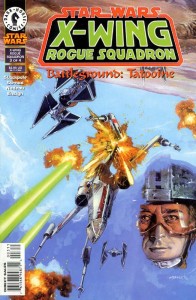 Jabba the Hutt is dead, and in the ensuing scramble for power, a secret Imperial weapons cache could be the key to victory. But only one being alive knows the location of the hidden weapons cache — Firith Olan. While that makes Firith a very powerful being, it also makes him a prime target. In a desperate race to uncover the missing weapons, as the criminals converge to fill the role of the dead Hutt, Wedge and Rogue Squadron find themselves smack in the middle of Battleground: Tatooine!