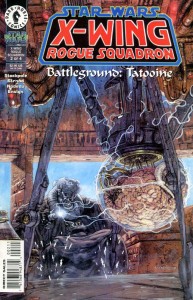 A criminal warlord has stolen a vital bit of information, so vital, in fact, that Wedge and the Rogue Squadron were going to steal it themselves! Rather than simply steal it, they’ll now have to fight for it! Through the heated deserts of Tatooine, in the midst of a gang war sparked by the death of Jabba the Hutt, the Rogue Squadron risk life and limb for the Rebel Alliance!