Clone Wars Volume 7: When They Were Brothers 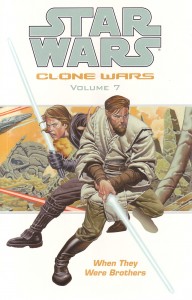 Many on both sides of the Clone Wars have been wounded or killed. But the war has taken its toll on the survivors, too.

Consumed by the belief that the Dark Jedi Asajj Ventress still lives, Obi-Wan Kenobi has temporarily forsaken his duties and recruited Anakin Skywalker in his desperate hunt for Ventress.

But Anakin believes that Obi-Wan is chasing a ghost-because he himself killed Ventress. And Anakin’s doubts about his former Master’s quest are not assuaged when, following the trail of the rumors of Ventress‘ existence, they walk into a trap set by their old enemies, the bounty hunter Durge and Count Dooku!

A tale that tests the strengths of the bonds of brotherhood!